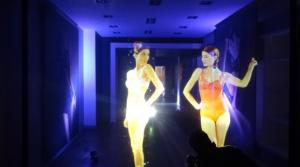 LONDON, UNITED KINGDOM, June 25, 2019 /EINPresswire.com/ — When watching the Hollywood blockbuster, there is a scene we are very familiar with: the protagonist swings his hand, and a three-dimensional virtual display screen appears in front of him, and the content on the screen can be switched at will. In many museums, concerts or fashion shows, we often see similar three-dimensional images, which have shocking and vivid effects and is called as "holographic projection" by people. The scenes in Hollywood blockbusters have now become reality. The holographic girlfriend created by WIMI Hologram AR began to walk into the mass.

"Holographic projection technology" refers to that an object has motion trajectory, spatial position and other information in addition to a simple appearance and color, which is difficult to be presented by traditional photos. But if these can be recorded in some way, the picture will show a 3D effect, and we can get all the information of this object, which is called holography. Holographic projection is a technology that records and reproduces the real three-dimensional images of the object by making use of the principle of interference and diffraction.

Mike Jackson is the most famous deceased singer in the world. Americans have synthesized and made Jackson's holographic concerts through the holographic software technology. Each ticket of the concert in Las Vegas and other places is sold for hundred of dollars, and there are nearly 1,000 audience in each concert every day, which has lasted for several years. Jackson's holographic concert is almost full every day, accumulating more than 1 billion U.S. dollars at the box office. It can be confirmed from this aspect that stage IP is also the most easily realized part in the holographic industry. Of course, this is also the most experienced visual experience brought by holographic technology.

Among holographic character IP in the construction of WIMI Hologram AR's holographic cloud platform, there is not only the IP of holographic girlfriend. WIMI Hologram AR, with focus on strategic IP and key IP, cooperates with film & television, animation and other institutions to jointly develop holographic animation and film & television works (such as micro film, serial dram, scene play, etc.) with shared copyright; it explores the feasibility of developing the holographic concert IP of deceased singers such as Huang Jiaju; it conducts IP development cooperation with film and television companies, commercial real estate companies, brand institutions, automobile manufacturers, etc. Relying on its rich IP resource library; it is access to high-quality scripts relying on internal production strength and creates unique IP by means of self-development + outsourcing.

When the era of real 5G communication comes, communications with people are no longer limited to both ends of the screen but can truly achieve three-dimensional real-time interaction in the 5G holographic video calls. As soon as the connection is made, digital images (that is, the hologram) are transmitted immediately, as if the two sides were chatting face to face in the same room. Going a little closer, seeing from the side, people can see the stereo effect of the other side's movements, and even see the precise details of the other side's skin. The holographic image is captured through the high-definition camera of holographic device, rendered via a cloud server and displayed dynamically during the call, which breaks through the traditional communication barrier. You can imagine sitting in front of a campfire and chatting with friends at any time, watching a movie in a private theater with your friends, holding meetings or other events anywhere in the world.

Previously the public only stayed at the level of immature technology, or perhaps disturbing different people will have different requirements for the appearance of holographic girlfriends. After years of development, holographic AI and other technologies are becoming more mature, and holographic AI interactive vision is an irresistible trend. WIMI Hologram AR has such a special holographic display device, which can make the hardware that is currently equipped with have a 3D image through other technical means. For example, with the mobile phone AR, there will be 3D image in mobile phone, which can be summoned when the user needs it, and the camera of the phone can also recognize others' movements and expressions, helping to obtain visual parts. Smart speakers can project images outward by the projection technology. Chat members in WIMI Hologram AR's holographic platform can decide their facial expressions through their expression buttons. In fact, the expression of virtual characters is very rich in the chat, and smiles, grin and various details can be displayed. WIMI Hologram AR's ultimate goal is to make the scene of holographic AI interaction bring people an immersive experience, including voice, motion and facial expression tracking. WIMI Holographic cloud platform can provide one-stop service, virtualize top entertainers and make virtual characters become stars. It is able to break through the time and geographical conditions through the holographic cloud. The holographic cloud choreography platform can provide combined and rich presentation of virtual effect, virtualize the physical scene, lower the cost and improve the effects presented.

In the history of human audiovisual technology, the pursuit of higher definition has always been a fundamental law. The standards of the broadcasting and television has been upgraded from standard definition, high definition, full high definition and 4K to 8K pilot stage and high-simulation holographic image of Rio Olympic Games in 2016. This kind of law will inevitably be reflected in the high-end engineering display. In the application of virtual simulation of large-scale cultural centers, cultural and tourism projects, sports venues and competition sites, and aerospace and nuclear industry, holographic technology means higher information carrying capacity and better visual experience. Real-time interaction has become the most subversive social innovation under the supplementation of 5G network. The social scenes have also expanded from reality to richer virtual reality, and immersive visual experience has made the social intercourse more immersive.