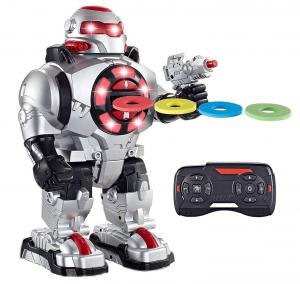 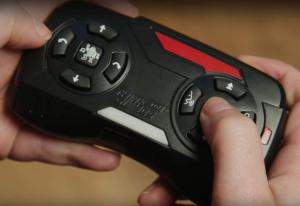 HORSHAM, UNITED KINGDOM, November 29, 2019 /EINPresswire.com/ — ThinkGizmos is pleased to announce that its popular toy remote control robot is now available on Amazon UK. Appropriate for boys and girls above the age of five, this innovative toy comes with numerous attractive features. The brand reports that prior to its launch in the UK, this toy has been extremely successful in the U.S. and selected European markets.

According to the company, the RoboShooter allows children to record any message of their choice and speaks the same message at the press of a button. It also features soft foam disks that shoot out of the robot's chest on command. The robot can be controlled easily with its 2.4 GHz remote control that is equipped with dedicated buttons for different functions such as walking, sliding, dancing, firing its blaster, shooting disks and talking. The manufacturer mentions that this toy is the perfect gift for ages 5 to 8.

"Small foam disks are included with the toy robot, which load by lifting its head and inserting them in the provided chamber. Then, at a press of the disk button, the robot will fire the disks out of its chest," said a spokesperson from ThinkGizmos. "With the provided 2.4 GHz remote, children will have no trouble controlling the robot; the remote includes buttons for each of the functions with images on the buttons to show what each of them does. Also, the robot speaks in English, French, German, Italian and Spanish."

To ensure safety, the Disc Firing RC Robot Toy was manufactured using strong, safe and non-toxic ABS Plastic, the company says. In addition to the robot, each pack contains the remote control, six AA batteries and a detailed instruction manual for controlling the robot.

Recommending the product, an impressed buyer mentions, "This is a fab robot. I bought it for my 5-year-old son's birthday. It is easy to use and does everything you would expect, gun sounds in addition to the disc firing, dances, slides, walks and talks. I would recommend for the under 8's instead of the expensive robots that are too complicated for them to use on their own. My 8-year-old son loves it too."

Those interested in learning more about ThinkGizmos' RoboShooter should visit the company's official website or Amazon storefront.