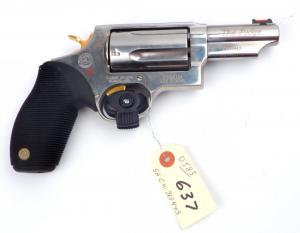 Many high-quality engraved shotguns among the auction's highlights

One of the most interesting firearms in the sale is a Taurus revolver called 'The Judge.' It gets its name because of the number of judges who carry it into the courtroom for protection.”
— Cindy Stephenson, Owner/Auctioneer, Stephenson's Auction

An ironically-named firearm in Judge Schaul’s collection is the Taurus.45/.410-gauge caliber, 5 shot double-action revolver known as “The Judge.” Stephenson’s owner/auctioneer Cindy Stephenson explained the origin of the name: “It’s called ‘The Judge’ because of the number of judges who carry it into the courtroom for protection.” The gun can chamber both .45 Colt ammunition and .410 2½ shotshell, making it useful for both short- and long-distance shooting. Estimate: $600-$900

Judge Schaul owned an extensive collection of shotguns, which he prized very highly. Some of them are ornately engraved, like his Inverness over/under 20-gauge 2-shot shotgun by CSMC, estimated at $4,000-$8,000. Another example is an Ithaca 12-gauge side-by-side shotgun engraved with images of ducks and a hunting dog. Its pre-sale estimate is $2,000-$4,000. Also handsomely engraved, a Connecticut Shotgun Mfg. Co. Model RBL-28 side-by-side shotgun is expected to make $4,000-$6,000 at auction.

A good-quality Ansley H. Fox side-by-side 12-gauge shotgun has double triggers and is capable of firing two shots. Its patent date is May 2, 1911. In like-new condition with engraving on the receiver and trigger guard, this Philadelphia longarm is estimated at $4,000-$6,000.

Another of Judge Schaul’s interests was European firearms. Among those seen in his collection are two Army & Navy CSL (London) 16-gauge side-by-side shotguns, each estimated at $4,000-$8,000; and a Chapuis Armes (France) Juxtapose Progress 20-gauge, two-shot side-by-side shotgun, ornately engraved and with special markings “WLM & Co. Scottsdale AC” stamped on the underside of the barrel. It comes in a fitted, hard-side Chapuis Armes France case. Estimate: $4,000-$7,000