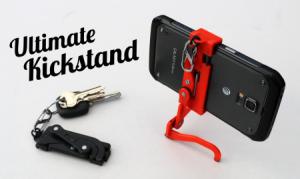 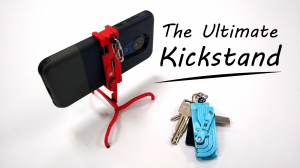 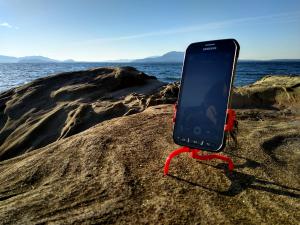 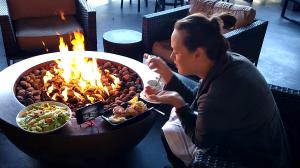 A pocket-sized, adjustable, clip-on tripod for smartphone. Folds up small enough to fit on a key chain. Great for taking pictures, videos or viewing hands free!

BELLINGHAM, WA, USA, March 3, 2021 /EINPresswire.com/ — Real McCoy Innovations announces The Ultimate Kickstand, a super-compact, folding, universal tripod for smartphones. An elegant solution for smartphone owners who like to take pictures, video, or watch media hands free. The Ultimate Kickstand can support a wide range of smartphones in any orientation or angle. It is now available to backers on Kickstarter for a basic pledge of $18.00.

Too often when smartphone users want to take a photo or a video, or even watch media on their mobile device, they have no way to position the device at the angle or orientation that they desire. If the a person wants to be in a photograph or a video without holding it in their hands, there are often out of luck.

The Ultimate Kickstand solves this problem by providing a sturdy folding tripod that allows precise positioning for capturing pictures or taking videos, while folding up compactly enough to fit onto a keychain when not needed. Easily attached and removed, and durable enough to withstand daily use, the Ultimate Kickstand is always on hand when you want to use your smartphone hands-free.

Ideal for people who want to be in the photos and videos that they take, without holding the smartphone in their hand or carrying around a bulky tripod or selfie stick, it also works very well for taking group photos or watching videos and can support a smartphone on nearly any surface.

“I thought, there has to be a way to make a little device that you would have with you all the time, any time you wanted to take a picture or a video, or use your phone without your hands” says inventor Jeremiah McCoy. Reviewer and author Cat Spydell says "Had fun playing with the Ultimate Kickstand, & it works!"

The Ultimate Kickstand is being made available through a campaign live on Kickstarter.com. The goal of the crowdfunding project is to raise funds for manufacturing of the finished product. Prototype testing and improvement has been ongoing for nearly two years, and full scale production will commence when the campaign concludes. The campaign will run until April 1 2021 and seeks to raise $30,000 for production tools, manufacturing and shipping of the initial order.

The Ultimate KickStand is also offering an incentive program to individuals who refer backers to the KickStarter campaign through KickBooster.me. The program offers a 10% reward for all referrals that result in pledges to the campaign.

Jeremiah McCoy is an inventor with a background in mechanical testing, as well as a passion for hiking and music. Real McCoy Innovations was founded to make products that improve our experience of technology by getting more use out of the things we have.