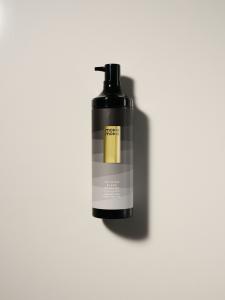 The conventional shampoo containers are often consisted of 4-layer coats, minimizing the shampoo’s exposure to light and oxygen. In fact, one critical drawback of such a model is that the air inflow into the container is inevitable when pumping the shampoo head.

The newly designed 3-step oxygen blocking container primarily blocks the inflow of oxygen with an aluminum pouch. Acknowledging that the aluminum has a low oxygen transmission rate, both the shampoo formula and the vacuum pump are placed inside the aluminum pouch. Also, a disc valve is located inside the pump. The disc valve secondarily blocks the possible inflow of oxygens by obstructing the backflow of shampoo back into the pump tube.

Finally, when the pump head is filled with shampoo, a small stick-like shaft, geared with the nozzle head inside the pump head, is pushed back due to the pressure exerted by the shampoo formula, creating a gap for shampoo to be discharged through the outlet. Then, once the shampoo is released, easing the pressure, a spring located at the back of the shaft pushes the shaft ahead, completely gearing the shaft into the nozzle head of the pump outlet.

According to an employee of MODA MODA, “As the main ingredients consisting of our shampoo formula are susceptible to oxygen, we desperately needed a technique that blocks the inflow of oxygen.” He added, “we were able to invent this sealing container after thousands of test runs with numerous shampoo containers presented in the current market.” Furthermore, he announced, “we hope to globalize MODA MODA’s exceptional products, beginning with our grand launch at Kickstarter in May,” denoting a promising plan.