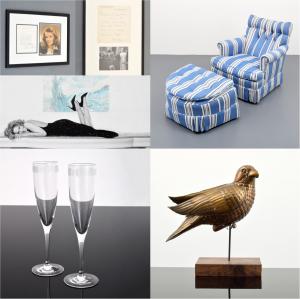 The lots highlighted in PBMA’s May 15th sale reflect her personal interests and passions, the things that were most important to her. 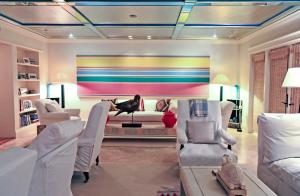 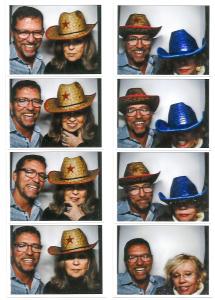 Selections from the private collection of one of the most powerful women in publishing is up for auction in Palm Beach on May 15, 2021.

The pieces we are offering on the 15th are connected to the life she made for herself in Palm Beach. I wanted to showcase the Paige who took a risk by holding out a hand to my partner and I years ago.”
— Rico Baca, auctioneer & co-owner of Palm Beach Modern Auctions

WEST PALM BEACH, FLORIDA, UNITED STATES, May 12, 2021 /EINPresswire.com/ — You can find feminist icons in the pages of magazines…or you can find them in charge of magazines. Before the current-day household names, there was Paige Rense Noland, editor-in-chief of Architectural Digest until 2010. The girl who ran away from her adoptive parents at fifteen because they lacked “vision,” changed her name and faked a college degree to get a writing job became the woman who transformed the ultra-competitive world of publishing and dined with princes, but she never forgot the things that inspired her.

“My first introduction to Paige is when she wrote about our gallery on South Dixie,” says Rico Baca, auctioneer and co-owner of Palm Beach Modern Auctions in West Palm Beach, Florida. “It was…2007 I think, and we were just building the auction house. The article was a brief mention, but that’s where it all began.”

Paige Rense Noland was an avid buyer at auction, bidding with a passion rivaling her well-documented appetite for real estate. After all, what is a woman with her backstory supposed to do with all that ambition once she has made it? Find another realm in which to compete. “When Paige came to the auctions, she knew the power of her credibility. Her participation and support were important, and that’s something I’ll never forget,” continues Baca.

“She told me ‘I go to New York (private of course) once a month to have dinner with Si Newhouse and watch a movie. Any time you want a ride, let me know,’ and I started going with her most months. She was my ticket to the city. It was really my first ‘wink of an eye’ support for our business. That wink would later turn into invitations to her Sunday Suppers. She would seat me to her right; a tongue-in-cheek gesture as I was certainly not the most socially important guest. This was one of her amusements.”

“Back in 2007 when she wrote about the gallery, I knew about her. Everyone knows about her, but the collection in our auction on the 15th feels much more intimate. Some of these pieces are things she bought here at PBMA. I recall her face lighting up when she raised her paddle. Others are things she’s collected over time that connect with her life story.”

Retiring to Florida almost universally means paring down, keeping the items with the greatest personal significance close to you but letting the rest go. What remains opens a window into the private world of the collector, in this case one of the most powerful women in publishing.

The private living room in Paige Rense Noland’s Florida home is designed for comfort. Her husband Kenneth Noland’s painting spans one wall, and several pieces being offered in Palm Beach Modern’s May 15th auction rest on her coffee table and light the room.

This blue striped club chair and ottoman occupied the corner of a sitting room just off Paige Rense Noland’s bedroom. In contrast to the designs she featured in Architectural Digest, she favored American Country style in her own home, and the set saw regular use. Meanwhile, Paige’s collection of autographs is a nod to her admiration for women who earned their powerful roles in career and society.

“I collect autographs of women. Strong women who made it on their own.” ~ Paige Rense Noland in Amanda Vaill’s 1994 article for New York Magazine, “The Only Dame in Town.”

The ambition it took to rise to the top brought its share of drama. A collection of Tiffany sterling silver and glassware – including several pieces done for Architectural Digest – suggest her longstanding but tumultuous relationship with John Loring, former design director at Tiffany & Co. Says Rico Baca, “Paige was known equally for both her loyalty and her grudges. You never wanted to let her down.”

Beyond divesting herself of several homes’ worth of art and design, moving to Palm Beach meant filling the void left by the loss of her husband, artist Kenneth Noland, and the end of her reign at Architectural Digest. Entertaining became her social outlet, while adopting a senior dog named Lucy inspired her to direct her passion and energy towards animal welfare. She was honored by the Humane Society of the United States for her work in eradicating puppy mills.

Of the curation process, Rico Baca says, “The specific pieces we are offering are connected to the life she made for herself in Palm Beach. I wanted to showcase the Paige who took a risk by holding out a hand to my partner and I years ago.”

Selections from Paige Rense Noland’s Palm Beach estate will be up for auction on Saturday, May 15 at Palm Beach Modern Auctions in West Palm Beach, Florida. For more information, visit www.modernauctions.com or call 561-586-5500.