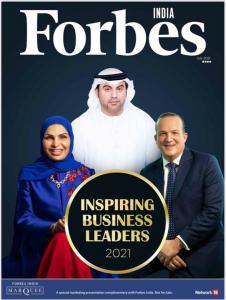 His Excellency Doctor Doctor honoris causa Raphael Nagel is a renowned investor, a lobbyist, and a philanthropist. He spent part of his growing up in Germany and Spain. Since 2001, he has been doing business in the United Arab Emirates, managing a Private Equity firm. His tireless entrepreneurial spirit has led him to found and chair more than 27 companies around the world in different sectors.

Leaders cannot be born; they are created through their experiences and skills, which Dr. Nagel is all about. His energetic, entrepreneurial spirit has led him to found and chair companies worldwide in different sectors allowing him to give to society as much as he receives. Like a Business leaders, Dr. Nagel is changing lives through job creation and social and environmental long-term added value. He has used the Abraham Accords and his abundant experience in investment baking to expand his multi-faceted portfolio. Doing business in the United Arab Emirates since 2001, where he held a Private Equity Firm, this inspiring leader sees economic diplomacy as the key to building relationships between nations and being the bridge between investors and business leaders.

In the last quarter of 2020, he Founded and Chair The Abrahamic Business Circle, a UAE-based business global networking organization established right after the Abraham Accords were officially signed. The organization is based in Dubai is composed of high-profile individuals and business leaders worldwide who share the same vision in fostering Economic Diplomacy through business and trade. The Abrahamic Business Circle aims to build business relations across religion and culture in the Middle East. With leaders from 7 continents, 56 countries with 27 languages, members of The Circle will gain insights into other countries’ cultures, values, thinking processes, and views.
This fantastic platform is perfect for meeting potential partners, distribution collaborators, and investors. As a member, you will be able to participate in all networking events, “the connections that people make during the events can also possibly lead to life-long relationships,” he said.

He is a firm believer in Economic Diplomacy as business people can positively influence a long-term peace agreement between the countries, and the reason he admired the great leader of the Emirates. The UAE is an incubator of the values of tolerance, peace, security, and multiculturalism, with more than 200 nationalities enjoying decent life and respect. It has become a global capital, where civilizations of East and West converge to enhance peace and rapprochement among all peoples. This is why this Forbes leader has decided to build The Abrahamic Business Circle in Dubai to resemble the tolerance and multiculturalism residents of the UAE live in their daily basics.
Before devoting himself to business and entrepreneurship, Dr. Nagel’s academic background in Economics and Law has been forged in university centers in Germany, the United Kingdom, and Spain. Also, he is an active member of the Scientific Committee of the Chair in Security at Andorra’s Universitat Europea.

Notably, Dr. Nagel was the co-founder of a Spanish investment bank specializing in cross-border transactions and debt restructuring. Over the years, he went above and beyond the call of duty to help others, he founded and established a Charity Trust to combat the social exclusion caused by over-indebtedness and support primary overall financial education and awareness, Fundación Nagel. Dr. Nagel is the President of this non-profit organization that was established in 2016. It focuses on helping, supporting, and promoting primary financial and economic education to people and groups at risk of social exclusion derived from their over-indebtedness while paying particular attention to single-parent families.

Despite his many occupations, his philanthropy mission has always lead his way. He believes that education is the only way for change in society and that we have to invest in it to allow every youth of this world to have this opportunity. While in Dubai, he has supported education by granting more than 3,000 full scholarships to young people with limited resources worldwide to have access to higher education. His biggest dream is to continue on this philanthropic mission unselfishly. As he always said, “Money doesn’t make a man; It is the man who makes money.”

To read the whole interview and more details of this successful Leader :