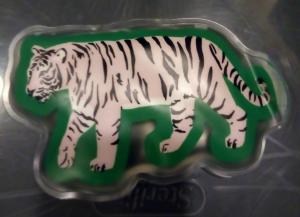 Parents should dispose of these ice packs or return them to Staples and demand a refund.”
— Vineet Dubey, environmental attorney

The soft Staples-brand vinyl ice pack features the image of a white tiger and sells for $2.99. Independent lab tests show the ice packs contain a whopping 315,000 ppm for DEHP, a chemical children absorb through their skin. Children’s products containing more than 1,000 ppm of the chemical are prohibited from sale in the U.S., under orders from the federal Consumer Product Safety Commission.

Staples has refused to voluntarily remove the product from its shelves. A lawsuit filed in California may force the company to comply. California law mirrors the federal ban on selling children’s products containing more than 1,000 ppm of the chemical.

“Staples was notified months ago of this dangerous product and then had ample time to do the right thing, which was to stop selling it,” said Vineet Dubey of the Los Angeles consumer law firm Custodio & Dubey, which sued Staples on behalf of the Ecological Alliance. “They ignored the warning — which speaks to how much they value their customers — and the next step was to file a lawsuit under California’s consumer protection law.”

A peer-reviewed study released Oct. 12 found that DEHP and related synthetic chemicals, called phthalates, may contribute to 91,000 to 107,000 premature deaths a year among people ages 55 to 64 in the U.S. People with the highest levels of phthalates had a greater risk of death from any cause, especially cardiovascular mortality, according to the study published in the journal Environmental Pollution. Phthalates are found in hundreds of consumer products such as children’s toys, food storage containers, make-up, and more.

China is a major producer of phthalate-containing products. The white tiger ice packs (Staples SKU 24429997) are made in China.

“Parents, teachers, child care workers — everyone should immediately stop using this ice pack on a child’s bumps and bruises because it’s far too risky to their overall health," Dubey said. “Parents should dispose of these ice packs or return them to Staples and demand a refund.”

What Every Parent Should Know About Phthalates