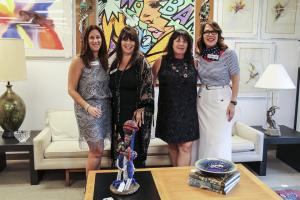 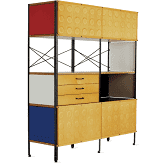 The Eames Storage Unit was designed post-WWII by Charles and Ray Eames, who are considered two of the most influential American designers in the 20th century.

I knew this beautiful cabinet was rare, but I didn’t realize how rare it was, this was an original.”
— Deborah Slobin, co-owner of Le Shoppe Too,

WEST BLOOMFIELD TOWNSHIP, MI, UNITED STATES, October 18, 2021 /EINPresswire.com/ — As newlyweds in the 1950s, Maurice and Nancy Allen of Franklin, Mich. purchased an Eames Storage Unit for $100. They had no idea they had a first-edition piece in their possession.

After her husband’s death, Nancy, 98, decided to move to Pennsylvania to be with her children. So, her son and daughter hired Le Shoppe Too and Detroit Fine Art Appraisals, based in Keego Harbor, to assess some of their mother’s possessions.

“I knew this beautiful cabinet was rare, but I didn’t realize how rare it was,” said Deborah Slobin, co-owner of Le Shoppe Too, the largest mid-century modern furniture store in metro Detroit. “This wasn’t a contemporary reproduction; this was an original.”

The Eames Storage Unit was designed post-World War II by Charles and Ray Eames, who are considered two of the most influential American designers in the 20th century. They met while studying at the Cranbrook Academy of Art in Bloomfield Hills, Mich. and were married in 1941 – becoming a powerhouse couple in the world of architecture and furniture design.

They designed the Eames Storage Unit as a geometric and brightly-colored lightweight system of freestanding cabinets constructed of plastic-coated plywood, enameled Masonite, and steel framing. The Herman Miller Furniture Company began marketing these storage units in 1950 – shortly before Maurice and Nancy spotted one while shopping for apartment furniture.

Slobin advised the Allen family that their Eames piece would likely go for more money if it went to auction rather than if it was sold at retail. Trusting Slobin’s expertise, the family agreed to use the Le Shoppe Auction House to sell their parents’ Eames Storage Unit. Slobin estimated that it would go for about $20,000 – but once bidding opened, it quicky went up to $25,000 and then $35,000 before finally hammering at $48,000.

The final bid was made by a curator for the Eames House, a museum and National Historic Landmark in Los Angeles, Calif. which was once the home of Charles and Ray Eames before their deaths in 1978 and 1988, respectively.

“We were shocked; we never ever thought it would go that high,” said Slobin. “The next day, Nancy’s son and daughter picked up their mother’s favorite bottle of wine and her favorite pizza to surprise her with the news. When they told her the final number, a huge smile spread across her face and tears of joy fell down her face. She told them, ‘Your father would be so proud.’”

Terri Stearn, founder and president of Detroit Fine Art Appraisals, said this sale set a world record for the most money ever paid for an original Eames Storage Unit.

“There’s only four or five of these cabinets left in the world,” she said. “Knowing that we helped get this piece into a public institution to be enjoyed by everyone brought us such joy.”

Le Shoppe Too, owned by Michigan businesswomen Slobin, Leslie Weisberg and Julie Sundberg, is an upscale consignment shop featuring a hand-picked collection of rare and iconic 20th century furniture, art, home décor, and lighting. Detroit Fine Art Appraisals, owned by Stearn, is the leading independent appraisal firm in the Greater Detroit area. Together, the two businesses offer a one-stop shop for clients – a place to have their belongings appraised and a place to sell their art and collectibles.

In March 2019, in addition to consignment retail, estate sale and art appraisals, the businesses partnered to launch the Le Shoppe Auction House – adding to their already extensive list of services. Stearn said they came up with the idea because, after many of the appraisals, customers would ask for their pieces to be auctioned.

“I would reach out to auction houses, and they were selling my clients’ artwork and making a lot of money off it. I realized I was the one appraising and finding these stellar pieces by iconic artists like Andy Warhol, and I was just giving them away,” she said.

Slobin added, “It just made sense. There’s so many different avenues for people to sell their pieces, and we offer it all in one place.”

Through the Le Shoppe Auction House, the four women host online auctions about once every quarter. In the two years since opening the auction house, they’ve become globally renowned with bidders representing more than 80 countries. Some of the notable pieces they’ve auctioned off include a woodcut print by pop artist Roy Lichtenstein, an abstract handmade paper piece by painter Kenneth Noland, and a bronze Clown Musicians by Marshall Fredericks, who is best known in Michigan for creating The Spirit of Detroit monument.

Each of the Le Shoppe Auction House founders has their forte when it comes to making the business run smoothly. Slobin specializes in furniture while Stearn specializes in art. Weisberg hosts the estate sales, and Sundberg is in charge of the shipping department.

“We each bring something unique to the table. We’re like a family, and we fight and love each other like we’re married. I feel like the universe brought us all together; we really are the dream team,” said Slobin.

The next auction will kick off Sunday, Dec. 5. One of the auction items is the War Pony sculpture by Allan Houser, a prominent Native American painter and modernist sculptor from the 1970s to early 1990s.