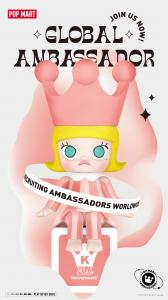 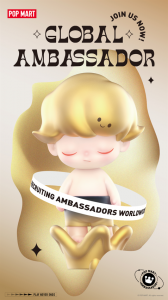 BEIJING, CHINA, October 20, 2021 /EINPresswire.com/ — POP MART, the global culture and entertainment company, best known for art toys and collectible toys announced its first Global Ambassadors program, aiming to connect the community of art toy lovers globally. As part of this program, POP MART is recruiting art toy lovers to apply for a chance to join their first round of Ambassadors worldwide.

Since being founded in 2010, POP MART has been committed to promoting the culture of art toys and bringing joy to the public. As a leading art toys brand in Asia, POP MART has expanded to over 23 countries and regions, becoming one of the fastest-growing art toy companies in the international toy industry. A POP MART Global Ambassador will be a representative of the company and help foster art toy culture worldwide. As part of the program, POP MART Global Ambassadors will receive packages of POP MART exclusive new arrival products and benefits including access to media events like PTS, the largest Art toy show in Asia. In addition, ambassadors will gain direct access to the POP MART International team.

The first round of POP MART Global Ambassadors begins mid-October and ends on November 5th. Applications can be submitted on their official global website, popmart.com. As POP MART grows, we hope for the Global Ambassador program and our ambassadors to grow with us, creating a culture of Art Toy appreciation all over the world. For any further information on the program, send an email to info@popmart.com